Home / PRODUCTION / Theses / Prospective assessment of agricultural water demand and options for sustainable management of water resources at the scale of the irrigated territory in central Tunisia - A. Azizi

Prospective assessment of agricultural water demand and options for sustainable management of water resources at the scale of the irrigated territory in central Tunisia - A. Azizi 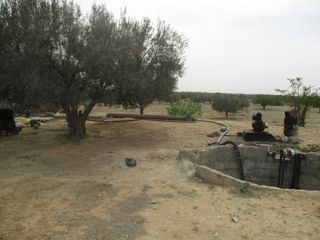 The rapid development of groundwater use for irrigation in Tunisia has been led to considerable agricultural growth. But in many areas such development is becoming unsustainable, as the case of Kairouan plain in central Tunisia.

The fragmentation of farms and the continued rise in the price of inputs in this irrigated area have been led to a decrease in farmers' incomes, encouraging irrigators to move towards high value-added crops to make their small batches profitable. But these crops (market gardening and orchards) are in return consuming more water, leading to a situation of imbalance between supply and demand. This imbalance is further accentuated by the succession of periods of drought and the dysfunction of the water distribution in the PPI, with frequent risks of breakdowns and very long water towers. This led to competition between users for access to the resource and a frenzy of installation of private boreholes resulting in an annual reduction of the water table level of about 1.5 m / year (CRDA, 2015).

The administration is unable to control the expansion of individual withdrawals and has to constantly reconcile objectives of preservation of water resources (closure of boreholes) in one hand and consolidation of agricultural development in the region (fixation of rural population, maintenance of production levels, improvement of farm income). In the absence of a real application of the laws to limit the overexploitation of the tablecloths, it is the whole agricultural economy which is weakened, with cascade effects on the rural development, the agricultural sectors, and in fine the food security from the country. In this context of overexploitation of aquifers, the estimation of water demand and the identification of its determinants seem unavoidable. The estimated water demand quantifies the existing gap and future imbalances between availability and need and best assesses the management options of the resource.

In this work we want to briefly describe the current context of the plain of Kairouan, the existing typology of farms, and the evolutions that have appeared since 2005. We will try to understand:

After, we will model the operation of typical farms (microeconomic modeling), taking into account the constraints that weigh on them and the land and water exchanges that took place between farmers.

Given the current very changing environment (markets, regulations, climate), predicting the demand for irrigation water in the medium and long term must take into account the uncertainties of the impact on agricultural holdings that the changes in context will have. Thus we propose to simulate the variation of water consumption according to different climate scenarios, agricultural policy options and a set of management tools.